Flight of the Gibbon

A gibbon is a primate found in Southeast Asian forests. There they swing about the trees using powerful little ape arms. While in Chiang Mai we were offered the opportunity to be part of a touristic adventure called Flight of the Gibbon. The pitch was to fly through the treetops, from platform to platform, although not exactly like the gibbon as we would be secured to a harness and zip line. 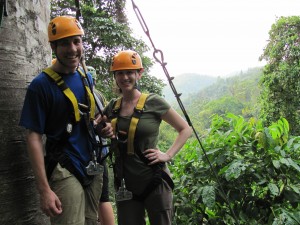 Brooke and Michael on treetop platform

Sound like fun, right? Wrong. Did I mention I’m petrified of heights? Really it’s not the heights so much as the falling from great heights that terrifies me. 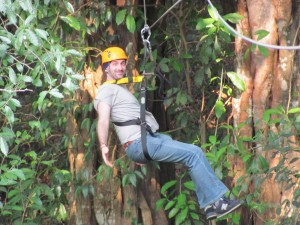 But I tried to reason with myself. I’d be strapped into a harness. This is probably much safer than the other crazy things we’ve done, like driving unfamiliar scooters on the left side of the road with wild traffic zipping all around us. And eating random sea creatures that turn up in the bowls of soup around here. And flying Laos Air. 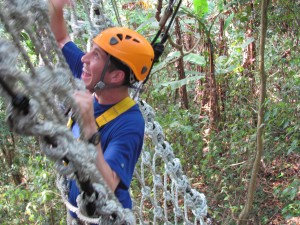 Scampering up a net. This guy can really scamper!

This was pretty far out of my comfort zone, as many things in the past few weeks have been, but I’ve told myself it’s time to get a bigger comfort zone already. So I tagged along and tried to stop my legs from shaking as we approached our first platform.

Our guides, Mao and Jit, sensed my trepidation and tried to accommodate me as best they could. And by accommodate, of course I mean they made my first few times down the zip line the fastest, bounciest, most gut-wrenchingest trips possible. Thanks for the hospitality, Mao and Jit. 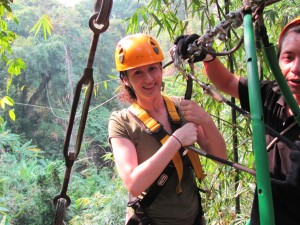 I tried to pretend I wasn't terrified. Fake it 'till you make it, right?

But after those first few screaming flights, it actually became less horrifying, and maybe even… fun. And so we jumped. Repeatedly. And zipped, and hung suspended, and flew some more, and dropped from heights previously unimaginable. And it was amazing! By the last few, I was springing from the platform, no longer hanging on for dear life (after all, that’s why we had the harness!), doing the things Michael and Seth had done from the start. 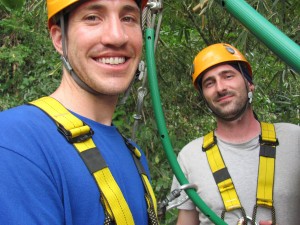 I think they were secretely as scared as I was. Ok, maybe not quite as scared.

Now that I’m officially over my fear of heights (or at least, zip lines) I figure we can  move even further into the adventure sports realm. Next up? We just booked a skydiving trip. (I’m kidding, Mom!) 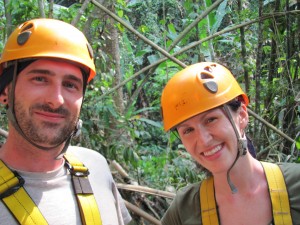 Whew! We made it!

This entry was posted in Uncategorized. Bookmark the permalink.

5 Responses to Flight of the Gibbon